In 1987 Peter Model a Cottbus engineer founded the environmental group Cottbus - an open working group of the Catholic and Protestant churches (UGC). As part of the oppositional civic movement in the GDR, it could only operate under the protection of the church. It was networked with other groups in the country and was closely monitored by the state security. It’s lectures and debates in the Cottbus castle church (today synagogue) gathered rising interest. The environmental group monitored the local elections in Cottbus in May 1989 and after finding malpractice filed a complaint for electoral fraud. In January 1990, UGC activists were instrumental in the takeover of the Cottbus Stasi site by a Citizens Committee to prevent the destruction of the remaining intelligence files. Peter Model died in 1993 but was honoured by the naming of a street in his memory in 2014 not far from the former Stasi site. 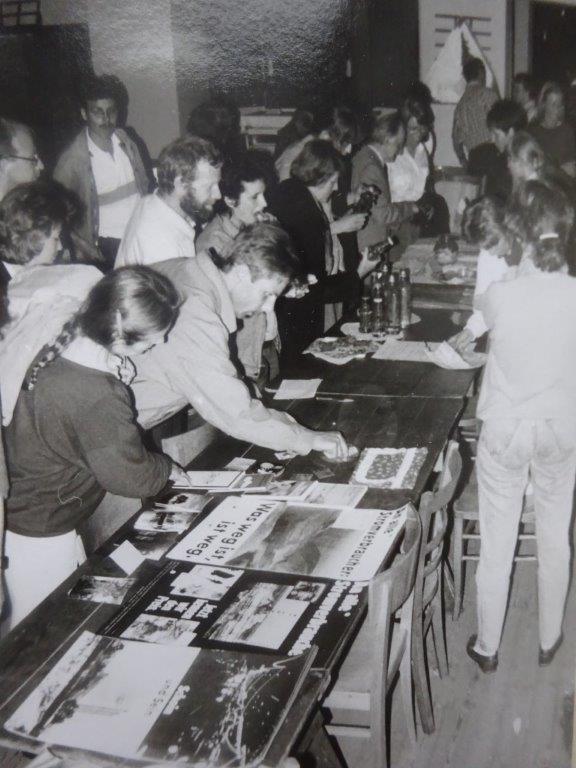 In 1990 the UGC became a registered association, merging with the AG Stadtökologie Cottbus. The environmental group Cottbus e.V. became part of the umbrella organization GRÜNE LIGA, which also was founded in February 1990 and operated from a regional office in Cottbus. Annette Grunwald in particular devoted herself to the fight against the excavation of Horno, Lacoma, Steinitz and Proschim. The consumer group "Rübchen" alongside the Fair Trade Shop (that still exists today) were founded by the environmental group at the same time. Long before the internet and e-mail became commonplace, a lovingly designed monthly newsletter kept environmentally aware people in Cottbus up to date.

The environmental group supported for many years the resistance against the mining of the Lacomaer ponds on the outskirts of the city (see the picture on the left). Since 1992 students and environmental activists have dared to act to reocuppy the already largely abandoned village. In 1996 only the Lacomaer ponds and the Branitzer Park were rated as "cultural-historical areas of the highest value for the nature and image of the city". This did not prevent the state government and the mining company LAUBAG (later Vattenfall, now LEAG) from suceeding in the destruction of the pond area with the assistance of the police who enforced access.

This prompted some Lacoma activists to join the UGC permanently and immediately began to get their messages across in the discussion about the proposed new brown coal mining facilities in Lusatia which started in spring 2007. The first thing the group did was to reach out and connect with the people in the affected villages. This was followed by regular joint actions such the Star March at the beginning of the year, the Reformation in Atterwasch in 2011 and since 2012 the Easter March in Rohne. The climate camps taking place in Lusatia since 2011 have also been actively shaped by UGC members. After ten years of persistent acts of common resistance, in March 2017 the LEAG Group abandoned the excavation of Grabko, Kerkwitz, Atterwasch, Rohne, Mulkwitz and the mines at Spremberg-Ost and Bagenz-Ost. However, villages such as Proschim are still threatened with resettlement, the mines are destroying the region's water balance and threatening to cause long-term consequential damage to the taxpayer. A gradual but timely exit from lignite (brown coal) has yet to be enforced. At the same time, other conflicts, such as facing up to the consequences of industrialized agriculture, are intensifying.

In autumn 2017, the environmental group celebrated its 30th anniversary. Some of the founding of the UGC are still present, joined by the many new faces have been added over the years.